Thelonious Monk - Live At The It Club 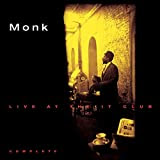 Review:
Thelonious Monk was one of Alfred Lion’s most difficult to launch performers at Blue Note. Sales of his albums were thin and did not improve much after he had left Blue Note for Riverside. Monk’s style and uncompromising approach was always going to be difficult to get across; a kind of lop sided stride piano infused with a deep blues commitment. A determination not to conform to accepted notions of polish and slickness of presentation. These were the hallmark’s of Monk’s take on jazz.

The French critics Charles and Comolli even want to say that Monk’s approach was a deliberate act of refusal. (“It’s well known that Monk’s creation seems to derive from refusal, from hard choices, and thus it resists all kinds of impulses, possibilities, openings, solutions: that special note is like a challenge to the other notes….. Monk’s music says more by saying less: the restrained, compressed expression, reduced to the simplest expression, the convergence and end product of a creative spectrum gets tighter as it goes…..it acquires the same kind of resistance as a spring…”). This may be going too far, but it gets over the idea of the dichotomy that emerges so strongly as you listen to this music; at the same time that Monk was refusing to go along with most of the accepted notions of what is required to make “good“ jazz, he was creating a whole new jazz vocabulary for the future by recovering what had been lost from the blues tradition.

Monk’s influence was felt first amongst fellow jazz musicians. Compositions such as “’Round About Midnight”, “Well You Needn’t”, “Ruby My Dear” and “Nutty” emerged as staples of Miles Davis and Art Blakey and the up and coming post bop generation. And the pattern has continued with successive generations adopting Monk’s music as a benchmark for their own creativity.

Monk did not remain in difficult obscurity for long. By the mid sixties after a move to CBS, he had been signalled out in a cover feature of “Time” magazine as the new voice of jazz. His albums with CBS (particularly “Monk’s Dream, “Criss Cross” and “It’s Monk’s Time”) became successes. And by late 1964 he had a touring band that seemed at last to understand his music and know how to allow him to reach out with his music to a wider audience.

Charlie Rouse is an important part of that transition. His tenor saxophone playing may have been many leagues less inspirational than that of John Coltrane (who had been part of Monk’s set up for a few months in the late fifties) but Rouse showed an understanding of what Monk was getting at in a way that few more apparently gifted players ever did. The same might be said of Larry Gales’ bass playing and Ben Riley’s drums. All in all they formed a tight, touring band that made memorable music in the two years 1964 – 1966 and brought Monk’s music to that wider audience.

“Live At the It Club – Complete” is the best of this group’s output. It captures a typical performance of this great band, live in a small club setting. The original vinyl version had been edited to get the duration down to what could be accommodated on a double LP. But with the Columbia Legacy CD reissue, the full performance is restored; resulting in over two hours of music. At last there this is an accurate picture of what being there at a Monk club performance must have been like.

This period is so interesting that there are two rival CD albums that cover similar territory; both of them good and worthy of hearing. Two days later (November 3rd and 4th, 1964) the band were again captured by Columbia in performance in San Fransisco. The resulting album “Live at the Jazz Workshop - Complete” offers further perspectives on the same material. And then on March 6th, 1965, the band were captured for French radio (RTE) live in a concert at Olympia, Paris; this has resulted in an excellent budget priced 2 CD album (“Olympia Mars 6, 1965”). Both albums are good with the French recording showing how the band had developed the basic repetoire as a result of being together on the road. But the “It Club” performance and recording is by far the best. The band has been captured on one of those nights when everything is just buzzing; the swing and pulse of the music has that extra something that sets it apart from these other, merely brilliant performances.

Monk had his own “acid test” for his music. If he could dance to it then it had swing and if it had swing it was working. The music on “Live At the It Club – Complete” is eminently danceable. Indeed, reports of these performances point out that Monk would dance on stage when Charlie Rouse and the rest of the band were playing; a large, lumbering bear like bop that meant that the acid test was being passed with flying colours.

The album reveals great extended performances of many of Monk’s classic compositions. Stand out tracks include "Blue Monk", "Well, You Needn’t", "Blues Five Spot", "Bemsha Swing", "Evidence", "Nutty" and "Straight, No Chaser". The remastered sound is extremely good, with bass well featured. There is little of the background hubbub of the club patrons to distract except the well meant applause that greets each number. It would have been great to have been there; this album takes you close.

Thelonious Monk's pioneering work is continued by the "Thelonious Monk Institute of Jazz" which holds prestigious annual competitions for young players and promotes jazz in educational programmes (see link below).

To look for "Live at the It Club" on CD at Amazon:

To preview and download other Thelonious Monk albums at iTunes:

To look for other Thelonious Monk albums on CD at Amazon:

To look for books on Thelonius Monk at Amazon:

To look for DVDs on Thelonius Monk at Amazon:

Other useful information on Thelonious Monk:

The Thelonious Monk Institute of Jazz

Interview with Robin D Kelly on his book "Thelonious Monk: The Life And Times Of An American Original"

Add a link to this site

Triple 'A' - Absolutely Amazing Album!! I challenge you to keep your foot still on Rhythm-A-Ning!!