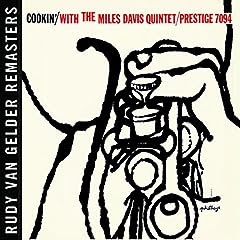 My Funny Valentine; Blues By Five; Airegin; Medley: A) Tune Up, B) When Lights Are Low.

With the release of "Cookin' with the Miles Davis Quintet" Rudy Van Gelder has completed the reissue in remastered form of the five quintessential Prestige albums recorded by Miles Davis and John Coltrane at his studio in Hackensack, New Jersey in 1955 and 1956. The series comprises "Miles", "Relaxin'", "Workin'", "Steamin'" and "Cookin'".

As Rudy Van Gelder says in his online comments on the Prestige Remaster series: "I was the engineer on the recording sessions and I also made the masters for the original LP issues of these albums. Since the advent of the CD, other people have been making the masters. Mastering is the final step in the process of creating the sound of the finished product. Now….. I can present my versions of the music on CD using modern technology. I remember the sessions well, I remember how the musicians wanted to sound, and I remember their reactions to the playbacks. Today, I feel strongly that I am their messenger.”

It is correct to feel in awe of this music and to regard this as an opportunity to finally get this great music into shape for posterity. And Rudy Van Gelder does not disappoint; these remasters really do add the depth and vibrance that has been missing on earlier CD versions of the original session tapes.

The five albums are easily pigeonholed as the body of work that Miles Davis produced to finish off his recording contract with Prestige ahead of his move to CBS and the release of the album "Round About Midnight". Negotiations between the two companies had been concluded; the quintet could work for both companies at the same time with the proviso that the CBS material could not be released until the Prestige releases were completed. So while the CBS work was ongoing there was the small matter of four Prestige albums to record and release. Yet as with so much of what Miles was to later achieve, this was turned into an opportunity rather than a limitation.

Miles Davis knew that he had a special band that really was "cooking". He had recently (September 1955) added John Coltrane on tenor sax in place of Sonny Rollins and the band was playing to packed houses at the Café Bohemia, in Greenwich Village. As Miles Davis recalls in his autobiography: "….Trane was blowing his ass off. George Avakian from Columbia Records used to come down almost every night to hear the band. He loved the band, thought that is was a great group, but he especially loved the way Coltrane was playing now. I remember he told me one night that Trane "seemed to grow taller in height and larger in size with each note that he played," that he "seemed to be pushing each chord to its outer limits, out into space"." And Miles also had Philly Joe Jones on drums: "…as great as Trane was sounding, Philly Joe was the fire that was making a lot of sh** happen…. he knew everything that I was going to do, everything I was going to play; he anticipated me, felt what I was thinking". And then there was Paul Chambers on bass and Red Garland on piano: "Paul Chambers … was playing like he had been around for ever… and Red … was giving me that Ahmad Jamal light touch, and a little bit of Erroll Garner, along with his own sh** up in all of that. So everything was happening…… by the beginning of 1956, I was really enjoying playing with this group and enjoying listening to them play as individuals."

And if the band was in a purple patch, Miles Davis had a novel concept to frame the "missing" Prestige sessions around. At Hackensack, the band sought to create the atmosphere and feeling of hearing them as if they were in a small club - with the same intimacy but with professional recording dynamics. The result is almost unique, capturing a sensational band at the height of its creativity with real intimacy. And this is exactly the feeling that comes over in these great recordings, what gives them their special quality. As Miles Davis recalls: "I remember this session well because it was long, and the playing was great. We did no second takes. We just recorded like we were playing a nightclub set." No second takes. Here, as with so much of Miles Davis' later output, the risk of the odd bad note was to be traded against the much greater gain a spontaneity that gives a recording real life.

"Cookin'" was the last of the "missing four" Prestige albums to be released. It contains first outings for "My Funny Valentine", "Blues By Five" and Sonny Rollins' "Airegin", treatments that would become part of Miles Davis' core repertoire for the next seven years. And right from the opener, "My Funny Valentine", it is clear that that combination of musical openness and the plangent sound of trumpet struggling to overcome the constraint of the Harmon mute which would become Miles' trademark sound was now well in place. The reference to what Miles had learned from listening to Ahmad Jamal is central; this earliest version of "My Funny Valentine" is all about setting the scene for that openness, to the point where you can see that this music is already more abstract than representational. This feeling is enhanced by the quartet performance (John Coltrane is sitting out) so that when Miles has finished his long first solo and Red Garland takes over on piano, there really is a sense of a music stripped down to its barest essentials, a type of minimalism that leaves much of the creative process to the listener.

The uptempo blues "Blues By Five" gives the first opportunity for John Coltrane following a Miles' opening solo that seems to serve as a premeditated tension building introduction. The solo by Coltrane builds from perhaps uncertain beginnings into a fully worked out flight of the imagination, taking lyricism in blues to places it had not been before. And this sense of openness and musical space, the contrast between Miles' constrained minimalism and Trane's expressive lyricism is carried through into much of the remaining music on the album, especially in "When Lights Are Low". Miles has always claimed that his trumpet style was influenced in part by listening to guitarist Charlie Christian, that he played trumpet as if it was a guitar, and you can hear that here.

This is a great album taken on its own. When considered together with its three companions recorded in those few long sessions at Hackensack, this is a defining body of work that was central to the future development of jazz.

To preview and purchase “Cookin' with the Miles Davis Quintet” at iTunes Store:

To preview and download "Cookin' with the Miles Davis Quintet" on MP3 at Amazon:

To preview and purchase "Cookin' with the Miles Davis Quintet" at our Amazon store:

" Cookin' with the Miles Davis Quintet"

Other useful information on Miles Davis: