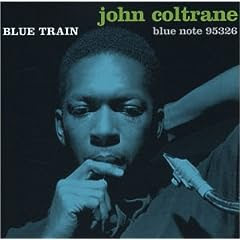 It is easy to value John Coltrane's "Blue Train" while at the same time failing to do full justice to its importance.

But then, the argument goes, "Blue Train" is ultimately uncharacteristic of the great tenor player's music. Somehow it makes too many concessions to the Blue Note 'sound'. If there had been more recordings for the label, his music may have gone further in this direction, but as it turned out, he joined Miles Davis in the modal revolution, then signed as leader with Atlantic and then Impulse! where his own music went off in further new directions with "Giant Steps" and "A Love Supreme". It is a widely accepted view. And the paradox is that "Blue Train" thus remains in many ways undervalued.

The first thing that you notice, especially in the title tack and on 'Moment's Notice', is the exceptional harmonization of the three horns. Like Dizzy Gillespie, Percy Heath and many jazz players before him, John Coltrane had been studying harmony at the Granoff School of Music in Philadelphia. You only have to hear the title track "Blue Train" once for the completely distinctive harmonization that John Coltrane developed to stay with you. Many would have built a whole style around it; Coltrane hardly returned to it again in his later recordings. In this sense "Blue Train" is a singularity in John Coltrane's music. None of his other albums sound quite like it; not because of any Blue Note formula but because the album captures his soaring innovation in jazz just at that moment in its development, and at a point where he was about to move on.

Connection should be made to John Coltrane's personal life at this time. He had beaten his addiction to heroin that had begun in Philadelphia in 1953 and which had been overlaid on an earlier acquired addiction to alcohol and cigarettes.

In autumn 1956 (and again in March 1957 after a brief return), Miles Davis had been forced to fire him from his band. As Miles recalled in his autobiography: "I told Trane that record producers had been coming around listening to him, thinking about giving him a contract, but when they saw him up there nodding and shit, they held off. He seemed to understand what I was talking about, but he kept right on shooting heroin and drinking like a fish." *

Coming home to his wife Naima one day in the spring of 1957 after Miles had laid him off, John Coltrane stated that he was going to quit drugs. He retired to his room, drinking only water and after four days had kicked his alcohol and heroin habits. Ironically, he still remained hooked on tobacco, a habit he could only periodically shake during the rest of his life.

He was finally free from drugs, able to fully concentrate on the development of his music for the first time. As he later wrote at the time of recording 'A Love Supreme': "During the year 1957, I experienced by the grace of God, a spiritual awakening which was to lead me to a richer, fuller, more productive life. At that time, in my gratitude, I humbly asked to be given the means and privilege to make others happy through music."

Many people hear that in the music of "Blue Train"; the beauty that comes from an open hearted sharing of release; blues on the point of transcendence of the oppression of the world.

There was work with Thelionious Monk that exposed John Coltrane to the pianist's radical approach. Miles Davis was able to welcome him back into his quintet in December of that year; they were to go on to make the transition to modal music with "Milestones" and "Kind of Blue".

Experimenting with new harmonic ideas was exactly what was encouraged in the Miles Davis and Thelonious Monk environments, with Miles especially an encourager and mentor. It was Miles who bought John Coltrane a soprano saxophone as a gift and suggested he should work on playing it. It was visiting Blue Note to find recordings by the great clarinetist and soprano sax player of an earlier era, Sydney Bechet, that had brought John Coltrane into contact with Alfred Lion and the hatching of the idea of an album for Blue Note. And it was with Miles Davis that John Coltrane was encouraged to develop further musically. As he recalled, he found it "easy to apply the harmonic ideas I had... I started experimenting because I was striving for more individual development."

The title track, "Blue Train" is based around a short minor blues theme that shifts to major when John Coltrane opens up with his liberating eight chorus solo. It is not too simplistic to say that it captures that sense of the opening out to possibilities that his change in direction in life had brought. In an emblematic way it encapsulates everything that came to be felt about John Coltrane as a centre of black pride and optimism that oppression would be overcome; what led Miles Davis to say on John Coltrane's death in July 1967: "Trane's music…..represented, for many blacks, the fire and passion and rage and anger and rebellion and love that they felt, especially among the young black intellectuals and revolutionaries of that time…. It was that way for many intellectual and revolutionary whites and Asians as well… Trane' s death made me real sad because not only was he a great and beautiful musician, he was a kind and beautiful and spiritual person that I loved. I miss him, his spirit and his creative imagination……"*

Lee Morgan, just nineteen, plays an explosive trumpet solo, better than his somewhat disjointed efforts on the "Blue Train (additional take)" track. Curtis Fuller on trombone plays with bluesy intensity. Kenny Drew contributes a snakey, low down blues piano solo before the return to that unforgettable harmonized minor horn theme. It is a great start to a great album.

The next track, "Moment's Notice" is more uptempo yet continues the distinctive hamonization. And later, "Lazy Bird", said to be a variation on Tadd Dameron's "Lady Bird", is swinging and uptempo with space for fine solos by Lee Morgan, Curtis Fuller, John Coltrane and then Kenny Drew. These compositions are important since they are the first recorded example of one of John Coltrrane's greatest innovations, the experimental use of a cycle of thirds; the so called "Coltrane changes".

In the ii-V-I chord progression that is at the heart of jazz, the movement of the root notes is in minor or major seconds (a semitone or whole tone movement). John Coltrane discovered chord substitutions that gave root note movements of a major third (four semitones) or a minor third (three semitones), the so called "giant steps". There is speculation that he may have discovered this in the bridge to the Richard Rodgers and Lorentz Hart song "Have You Seen Miss Jones" where the sequence BbM7, GbM7, DM7, GbM7 occurs, the only known jazz standard to have this cycle of major thirds. John Coltrane would later expand on this idea in the compositions "Giant Steps" and "Countdown", a reworking of Miles Davis' "Tune Up". The long and short of this is that "Blue Train" is seminal in John Coltrane's development, the first time he had explored this most lasting of contributions to modern jazz.

The only ballad on the album, the Jerome Kern / Johnny Mercer standard "I'm Old Fashioned", is a place for John Coltrane's quieter, more conventional side to be showcased. What stands out is the complete control of his instrument and the wonderful timbre he had achieved by this time. None of this is accidental. He had worked long and hard to perfect this, working with the instrument makers Selmer to achieve exactly the sound he wanted. He was playing a Selmer Mark VI at this time, fitted with a 5-star medium metal Otto Link mouthpiece and a No. 4 Rico reed; a heavy combination that would have taken tremendous energy to blow successfully.

So, while there is little surprise in claiming "Blue Train" as a great jazz album, it is very clear that there is much more to its importance than its reputation as John Coltrane's 'only Blue Note'.

To preview and purchase "Blue Train" on CD at amazon:

To preview and purchase " Blue Train" on MP3 at amazon:

To preview and purchase "Blue Train" at iTunes store:

To preview and purchase "Blue Train" at on Vinyl LP at amazon:

John Coltrane, Avant Garde Jazz, and the Evolution of "My Favorite Things" by Scott Anderson

Add a link to this site